Use Systems and Stacks

The concepts of Systems and Stacks for DAS Entitlements is conceptually the same as it is for all system types.

Stack: A DAS Entitlements Stack represents policies that are enforced across a set of systems. For example, one stack could define the global policies for an organization while another defines the policies that are required for production systems. A stack ensures that when new systems or applications are created, that policy is forcibly applied to all of them; moreover, a stack makes an audit of organization-wide policies especially straightforward.

Multiple stacks: You can choose to have multiple stacks overriding a single system. You can use different teams to put their own policies in place (for example, IAM team, Compliance team, or Auditors, Data Team).

Conflict resolution: Multiple stacks may conflict with each other (and with the systems they apply to). DAS Entitlements resolves conflicts as follows. There are three decisions possible for each stack and system: allow (boolean), deny (boolean), entz (set). The final decision returned to the caller contains two fields:

For more information on the response format for decisions, see the Responses.

Decision explanations: Because one or more stack policies may override the decision made by a single system, when debugging policy it is valuable to understand which stack or system actually contributed to the decision. For more information on how to use the Decision Replay Mode to help understand why a decision was made the way it was, see the Responses page.

Stacks vs. Library: A DAS Library also has a collection of Rego code that occurs frequently to reuse them. However, unlike a stack, nothing in the library overrides the policies in a system or stack.

Entitlements Stacks work the same as every other DAS Stack. Every stack has a selector section, where the stack author configures which systems this stack applies to. Each system has labels, as shown in Figure 1.

Each stack selector dictates which combination of system labels are required for this stack to apply. 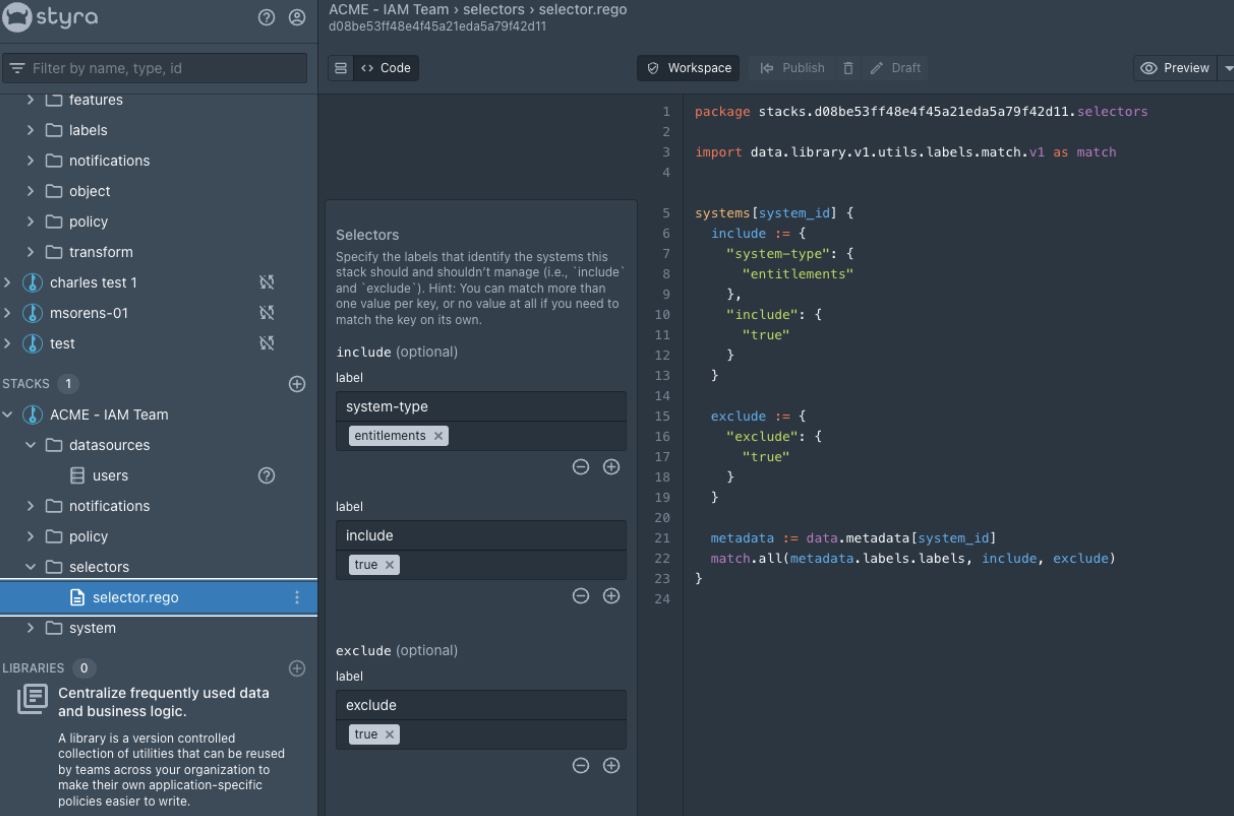 Stack rules can make exceptions for a specific system or number of systems through the system’s features.rego. This policy allows you to define rich data that a stack can use in its rule implementation.

The following shows an example of how a stack defines a rule that denies alice@styra.com as the subject.

In a system, any rule that tries to allow alice@styra.com as the subject is denied because its stack rule has higher priority than any of its system rules. In some cases, the system owner may want to make an exception to allow alice@styra.com in their system. The stack owner is required to make changes in the system's feature.rego and the stack rule.

The following shows an example of how an exception definition is added by the stack owner in the system features.rego:

To use the definition of the feature exception in a stack rule, look up a system's feature by using data.self.metadata.system_id and skip the rule evaluation by checking for allow.alice@styra.com in features.exceptions: